My grandad lived in Coolangatta in the 1940’s so our trip to Australia had to include a trip to the place he once lived.

We caught the greyhound from Noosa and the journey took around 5 hours, with a quick bus change in Brisbane. We arrived around 1pm to glorious sunshine and made our way to our hostel.

After checking in and dumping our bags we headed out to explore, not before a lunch stop at a local pie shop (in Australia they LOVE pies and there seems to be pie shops everywhere). We spent the afternoon soaking up the sun on the beach and watching the surfers catch waves, only wishing we could be as good as them. 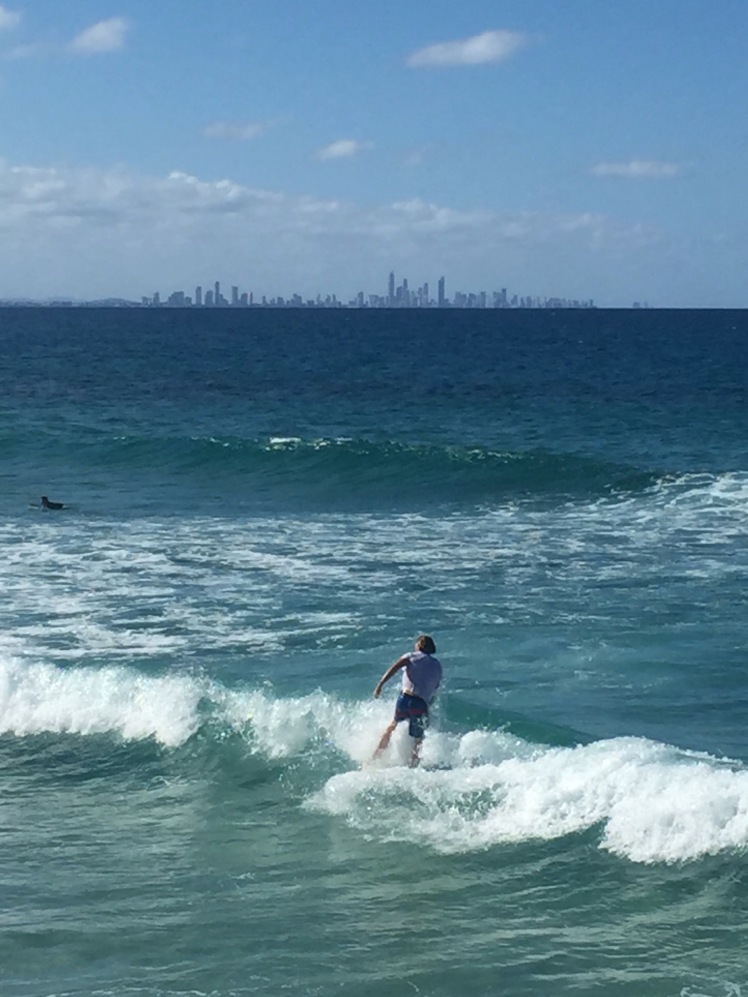 My grandad went to school in Coolangatta, and he often talks about it being on top of a hill, where he would watch the Sharks swimming in the bay with his school friends. After some research I found out that it was Coolangatta State School he attended and it was on Kirra Hill, it has now been changed into a community centre. Our hostel was around a 1 minute walk to the start of the hill, so before dinner we took a walk up there just to check it out before we went up in daylight the next day. 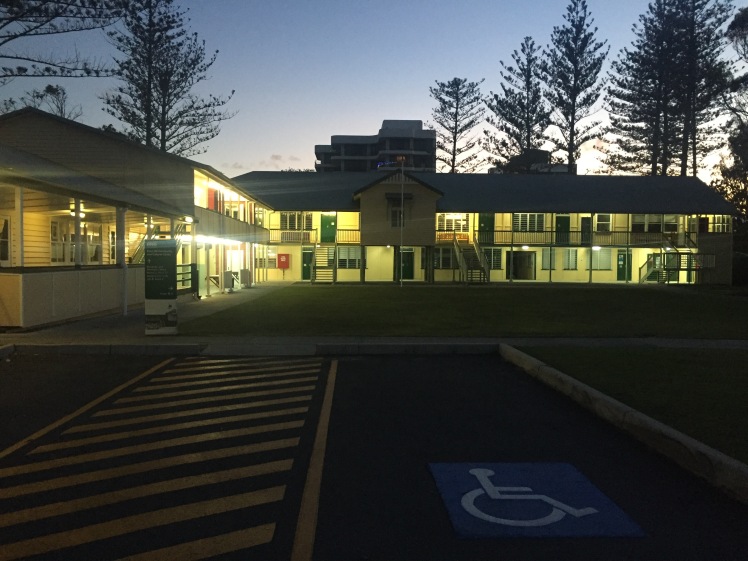 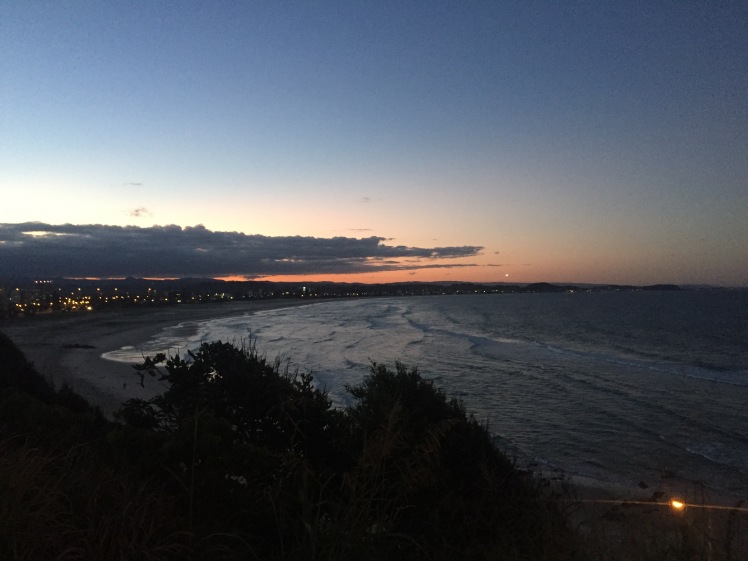 We decided that for dinner we would make use of the beach BBQ’s provided by the council, and enjoyed sausages in buns with lashings of ketchup, washed down withcold beer. The BBQ’s are a great facility which we’ve seen all over Australia, lots of people seem to make use of them to cook a lunch or evening feast, and we couldn’t wait to have a go ourselves. 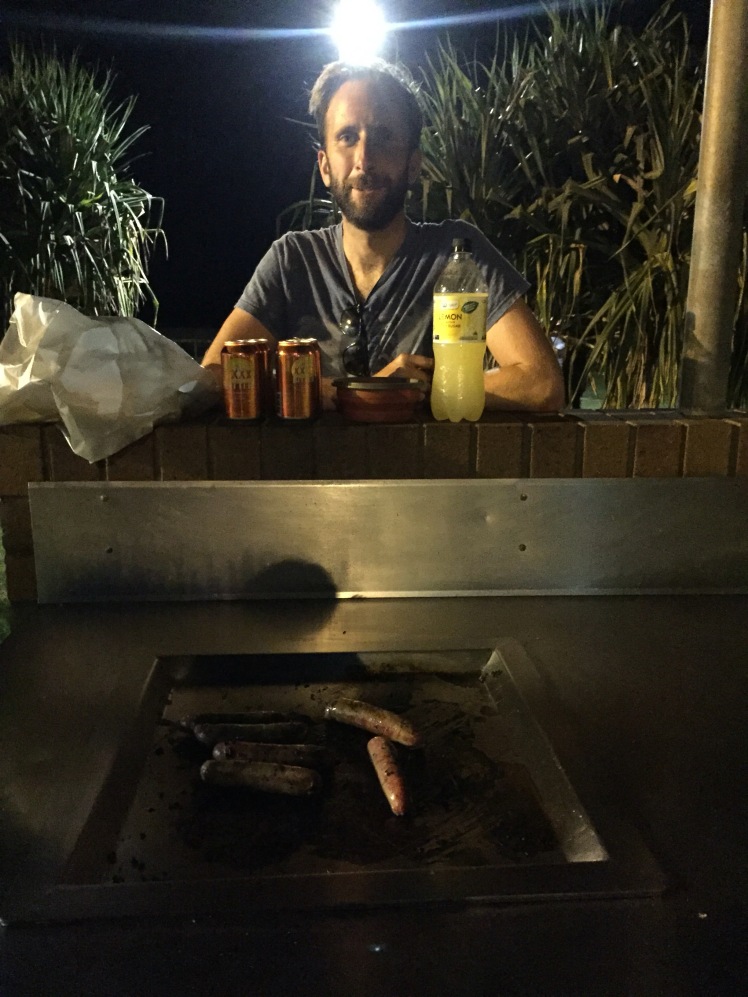 I spoke to my grandad that evening and he was pretty chuffed  we were there, and that we had found the school he attended.

Before bed, John said he had a sense that something didn’t feel quite right, and perhaps so did I as I opted to sleep in my shift dress that night instead of sleeping in my pyjamas. There were 2 entrances to our dorm room, neither of which were locked. I was sleeping peacefully at around 3am when I was suddenly woken by someone trampling on me. At first I thought it was the man in the bunk above, falling as he climbed down the ladder. Next I thought it was John climbing in my bunk, as he was right underneath the aircon and perhaps it was too cold. Then finally I realised to my horror and disbelief that it was infact a random man, paralytic drunk, climbing into my bed to sleep. He seemed to not notice there was someone in there, and wrapped himself in my covers and started snoring. I shook him and pinched him, trying my best to wake him but nothing seemed to stir the randomer. I went to reception to find no one there to help, so I woke John as I wasn’t quite sure what to do next. Finally we visited reception again to find 2 men down there, when we told them what was going on they rang the manager who was staying in the hostel to see what she could do. As we were walking up the stairs I showed them the pictures I had taken (as proof for my complaint the next day) to which they exclaimed “oh my god that’s matt”. Between them they dragged him out of my bunk, through the puddles of water (if it was water) on the floor and along the corridor to their room. The manager was very apologetic about the incident, saying how Matt is usually such a nice guy (of course he is) but said there was no other bed she could offer me (as mine was soaking wet) so John and myself would have to share the top bunk. The night just gets better. During our discussion with the manager, said drunk man stumbles down the corridor and can be heard very loudly vomiting in the men’s toilets. After getting ourselves as comfortable as possible, drunk man arrives back in our dorm via another door, and gets into the bed that is actually his. It turns out he was in the right room, but got into the wrong bed. After zero sleep from then on, I spent the rest on the night in disbelief about what had actually just happened. After we had breakfast, the time had come to wake the drunk man from his slumber, and fill him in on his 3am antics. I flicked water at his face, which saw him stir, then poked him till he woke up. After asking him whether or not he had a nice sleep (he looked very confused at this point) I filled him in on his behaviour and gave him a piece of my mind. He looked mortified, and almost as though he may cry, and apologised to me and John profusely, asking what he could do to make it up to us. We agreed that the least he could do would be to pay for our nights stay, seen as our sleep was ruined by him, and that it was incredibly inappropriate to be climbing into a girls bed. 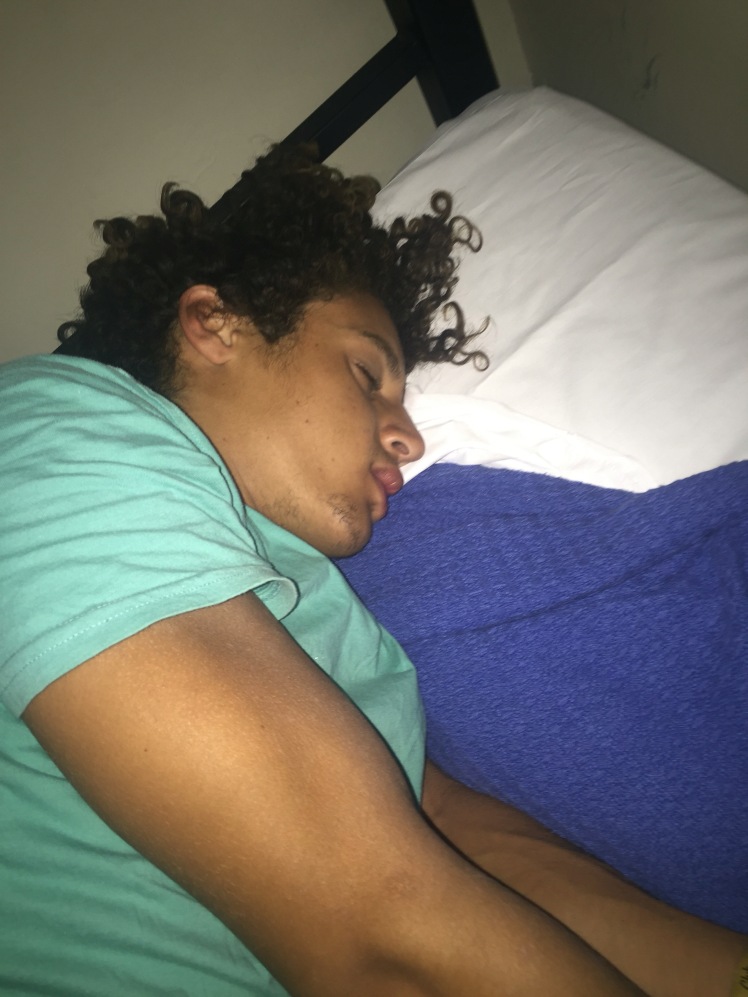 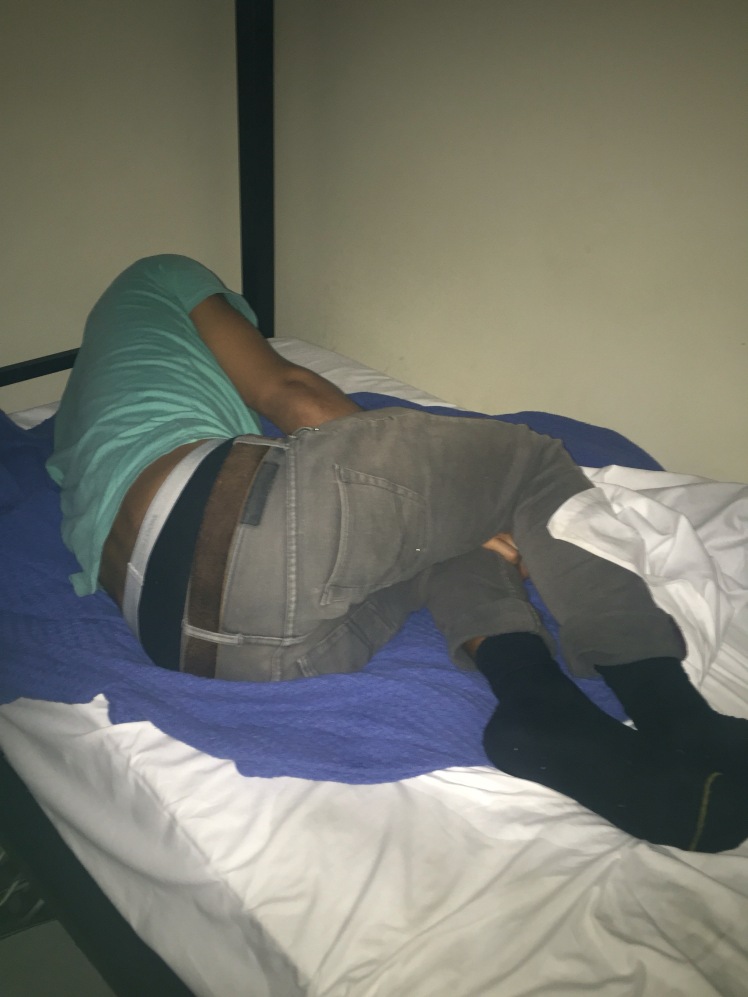 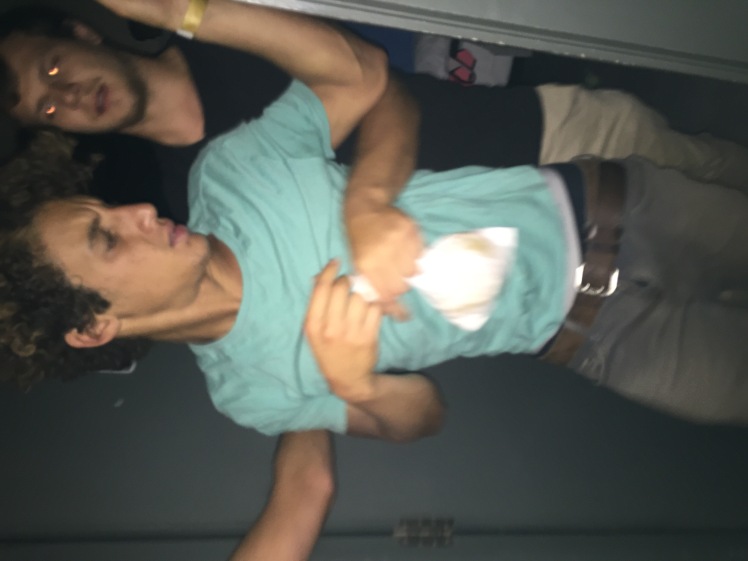 We headed to the beach after another conversation with the manager, and caught up on some sleep there for a few hours. We then went back up to my grandads school to have a look around during the day. It was great to see some pictures around the community centre which showed how the school looked back then. There was also a mueseum, but unfortunately this was closed as it was Sunday. One thing I had noticed was attached to the railings at the top of the hill were several locks with people’s names, just like those on Pont des arts in Paris. We bought a lock which I signed with my grandads name, and attached it to the bridge. I then threw the keys into the bay below. 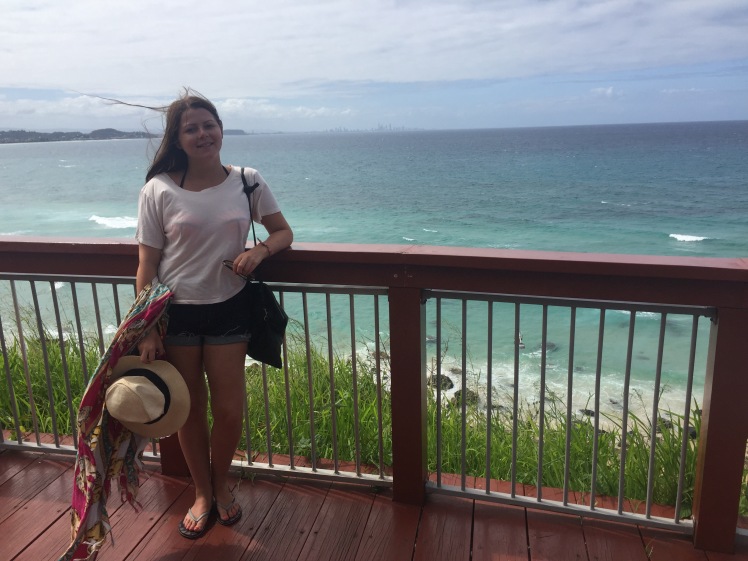 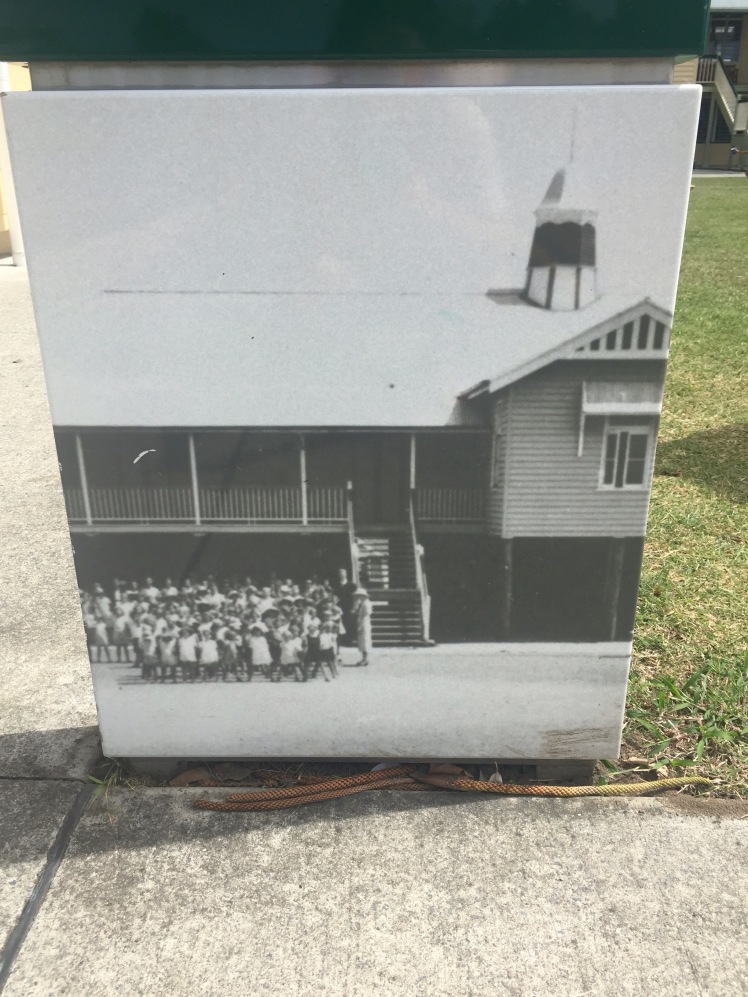 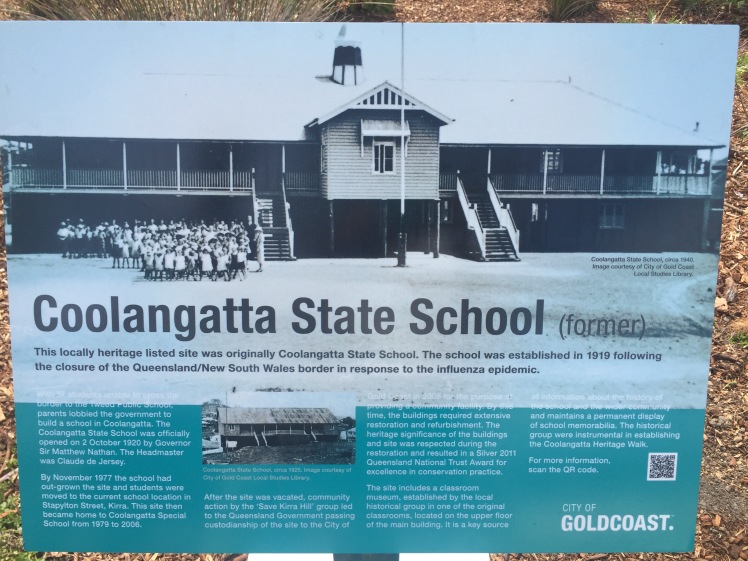 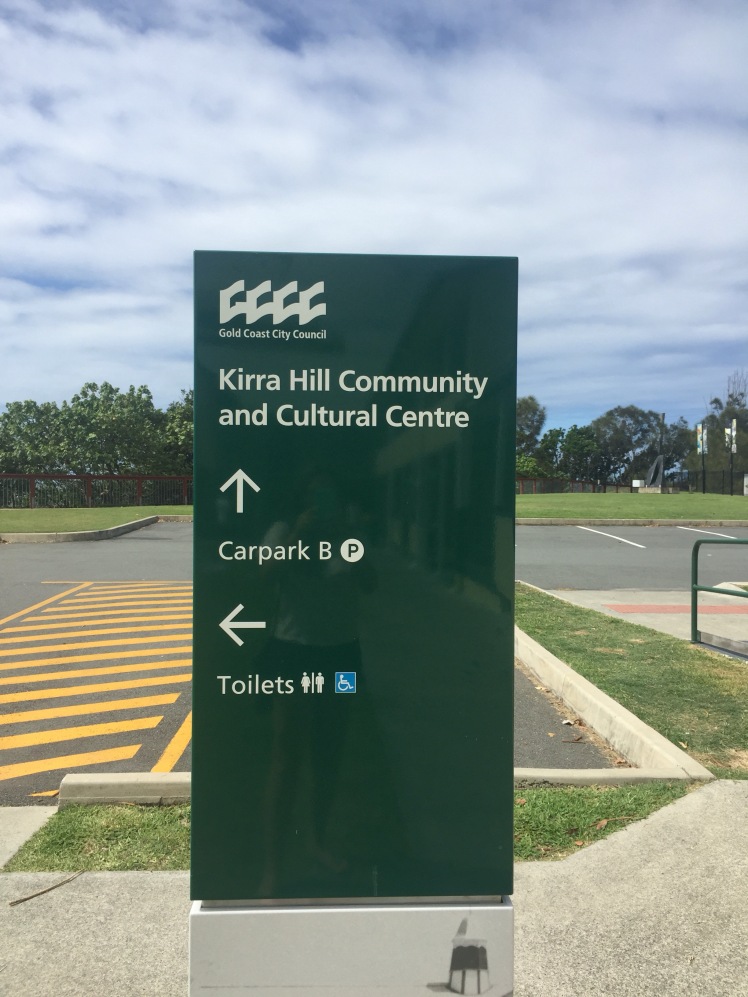 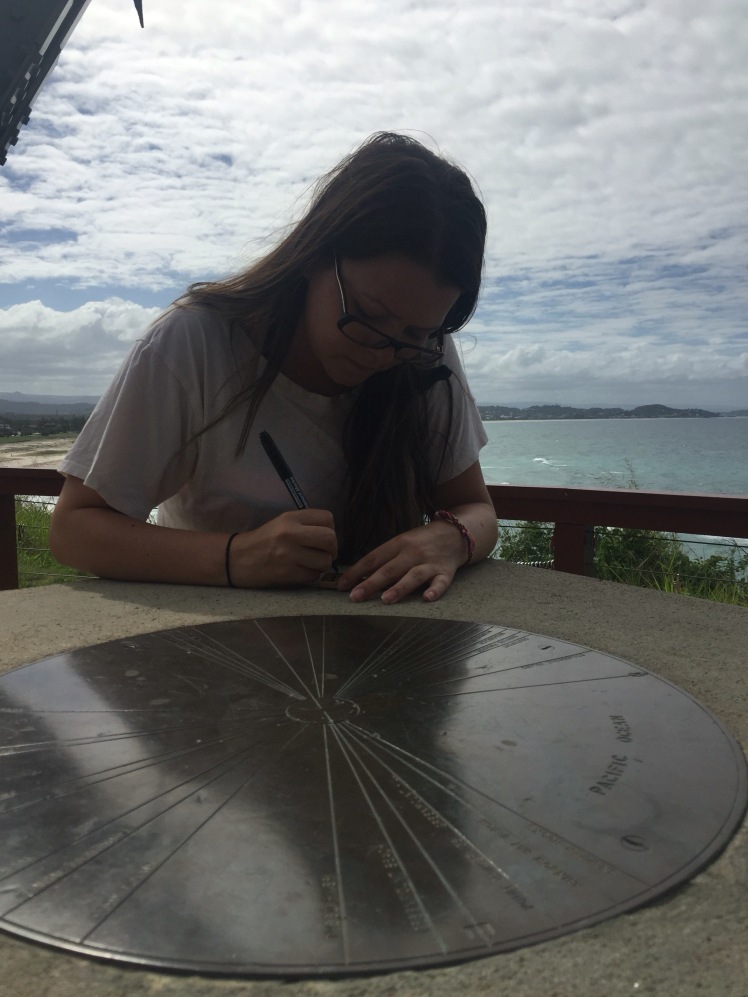 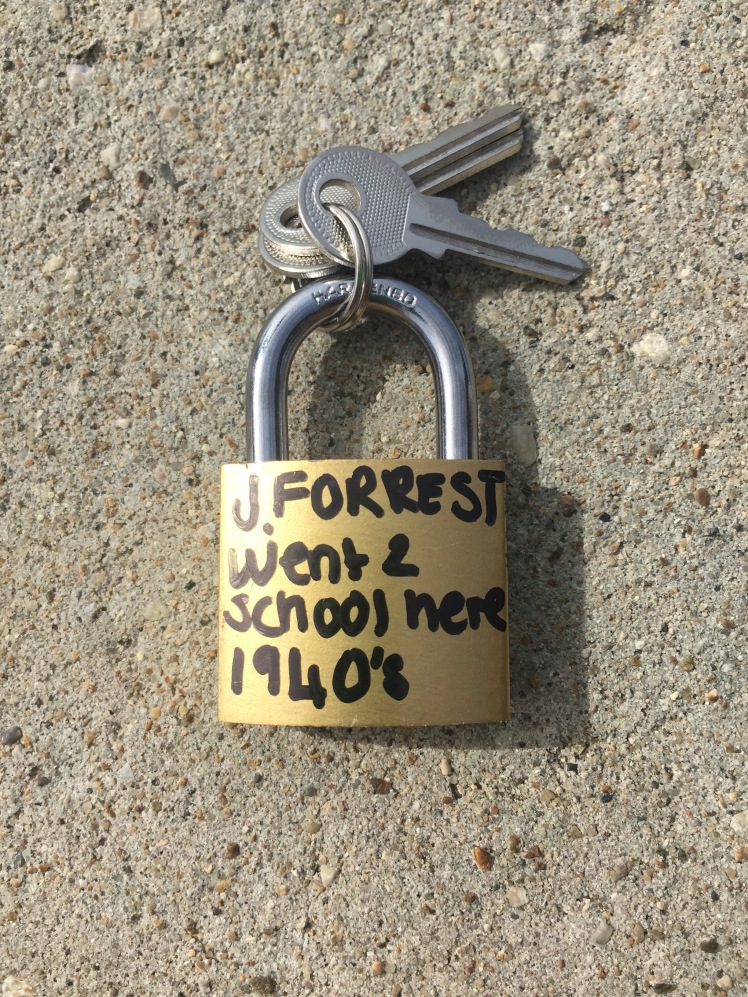 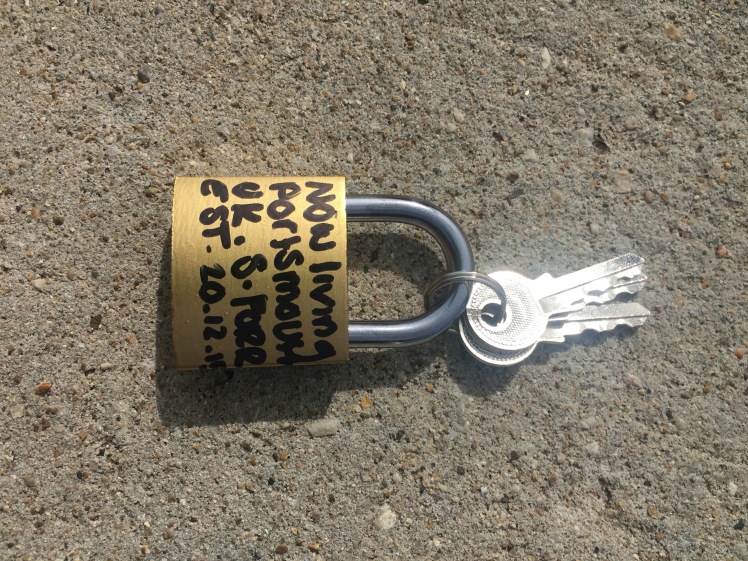 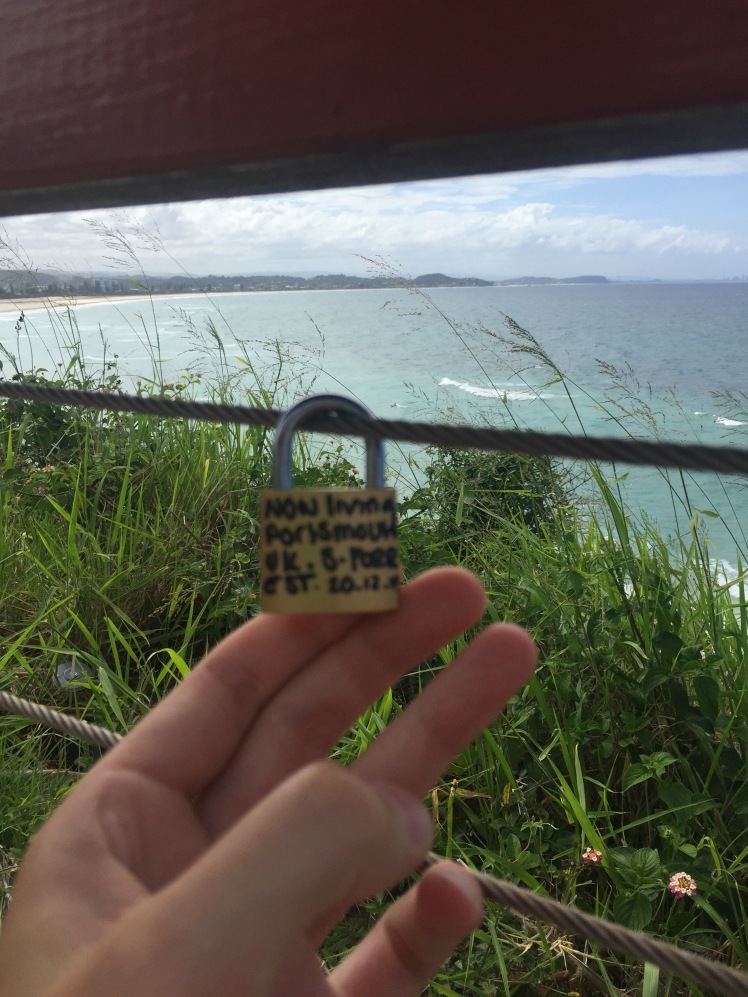 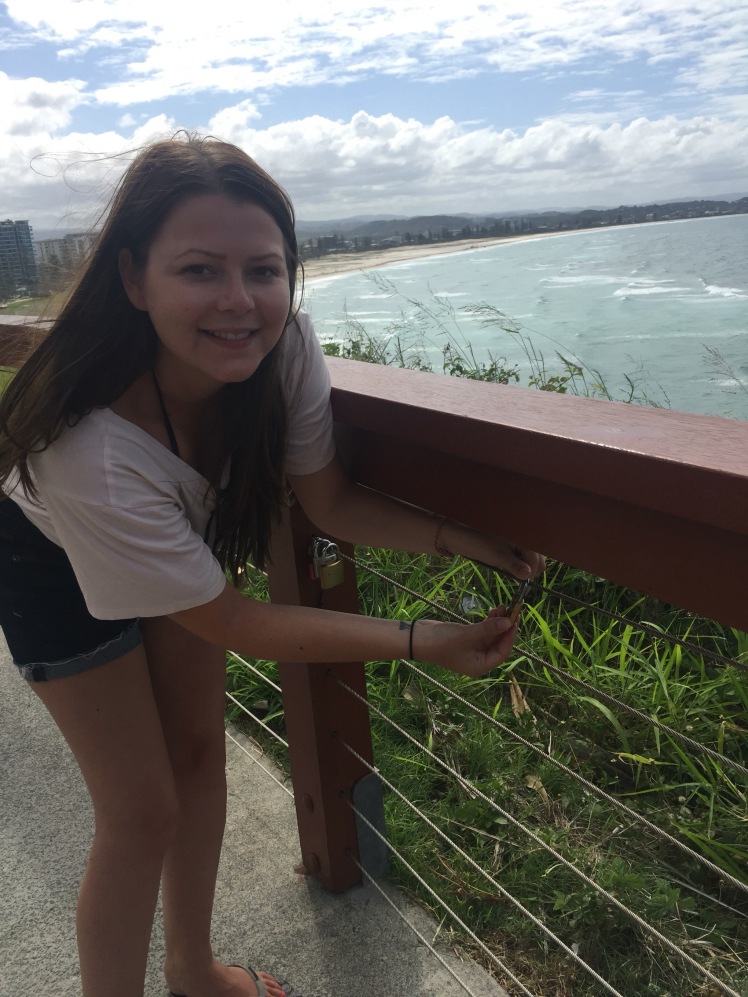 This pretty much concluded our time in Coolangatta, it was a flying visit but I got to see everything I went there for. Hopefully one day I’ll go back and be able to visit the mueseum, but hopefully my next stay won’t include a stranger in my bed! 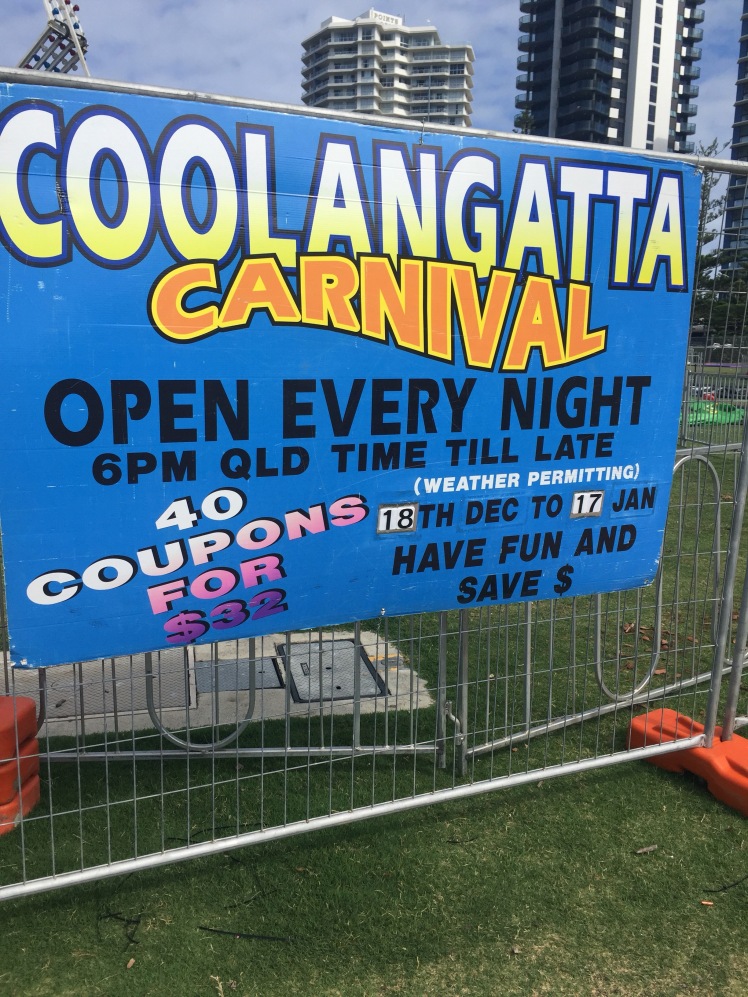 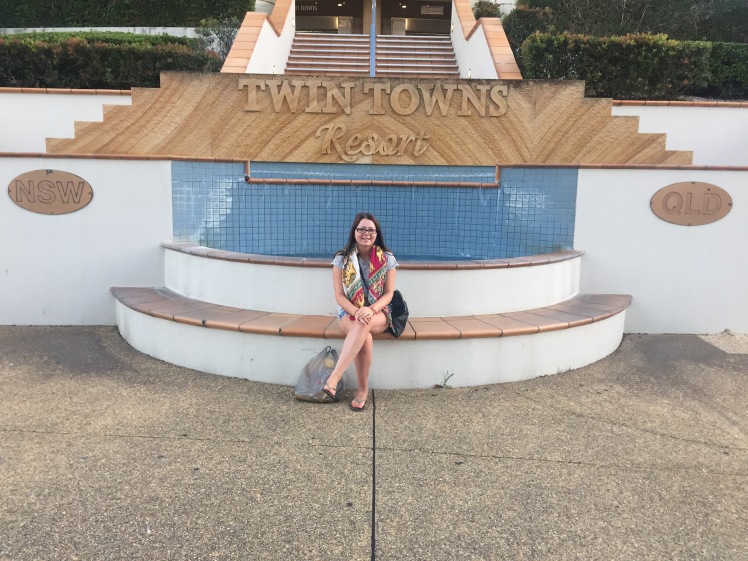 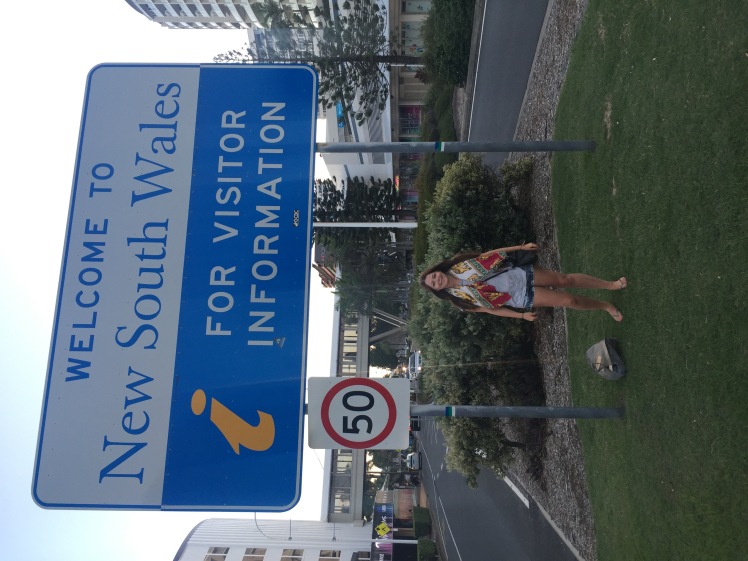