We only stayed one night in Vancouver before travelling to San Francisco, and we didn’t do much there as I was still feeling rotten from my cold. We caught the subway to the airport for the bargain price of $2.70 each as it was a weekend special price.

We had to catch a flight to Seattle, then transfer onto San Francisco. We were feeling chuffed after scoring an unexpected upgrade to the equivalent of premium economy for the flight to Seattle, however the captain anounced he would “get us up there, take a few right turns and we”ll be there in about 25 minutes”, so our upgrade was short lived. The plane only reached 13,000ft as the journey was so short, which felt crazy as it was only a month ago we both jumped out of a plane at 12,000ft! We were both staring out of the window, reliving the moment and remarking that it didn’t feel as scary as looking out of the plane window now.

As we flew into San Francisco on our second flight we could see the Golden Gate Bridge in clear view on our left. We took the super shuttle to our accommodation, which is a service we have used several times on this trip as they drop you directly to your door for far less than the cost of a taxi.

Our accommodation was a pretty basic motel but the location was excellent, being only a 10 minute walk to the piers. We set down our bags and went straight out, walking along to Fishermans Wharf and pier 39. We stopped along the way for a bite to eat in an Italian restaurant, I was desperately hoping for some buffalo chicken wings to be on the menu, as I’ve become addicted to them since being in America. The hot wings I received were not as I hoped and I was left disappointed! After our meal we walked along to pier 39 to see the Sea Lions. You could hear and a smell them long before you could see them, as we approached the pontoons they were all huddled on you could make out some splashing around in the water and others barking at each other. 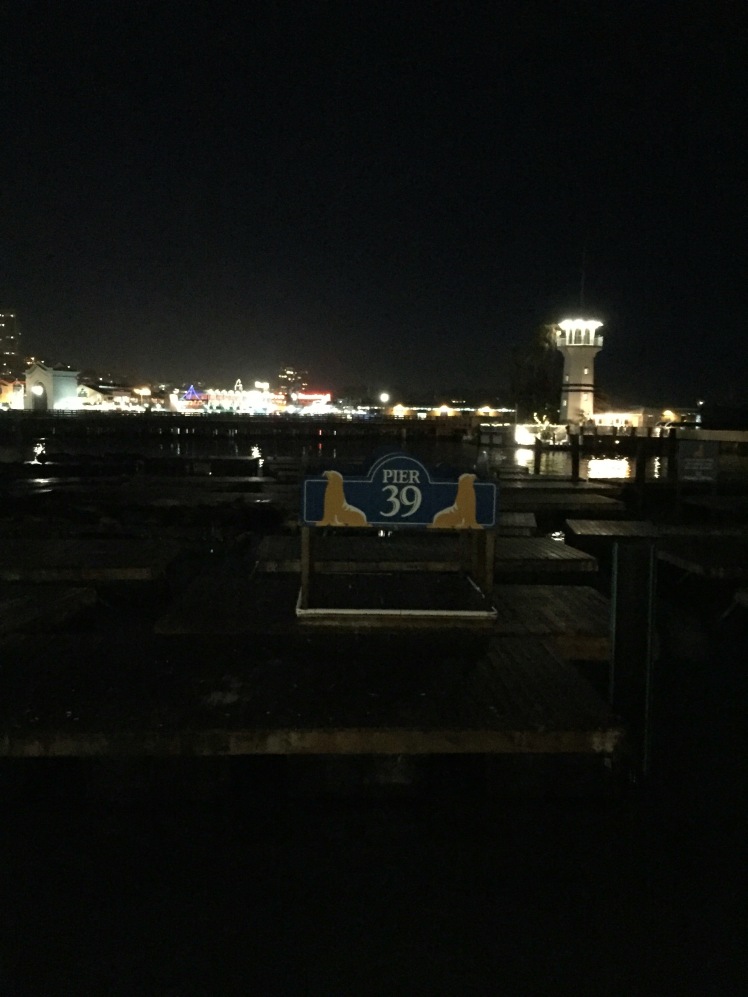 The next day we took a walk up a very Steep hill to Lombard street, deemed the worlds ‘crookedest’ street, and admired the view towards the bay bridge from the top of the hill. 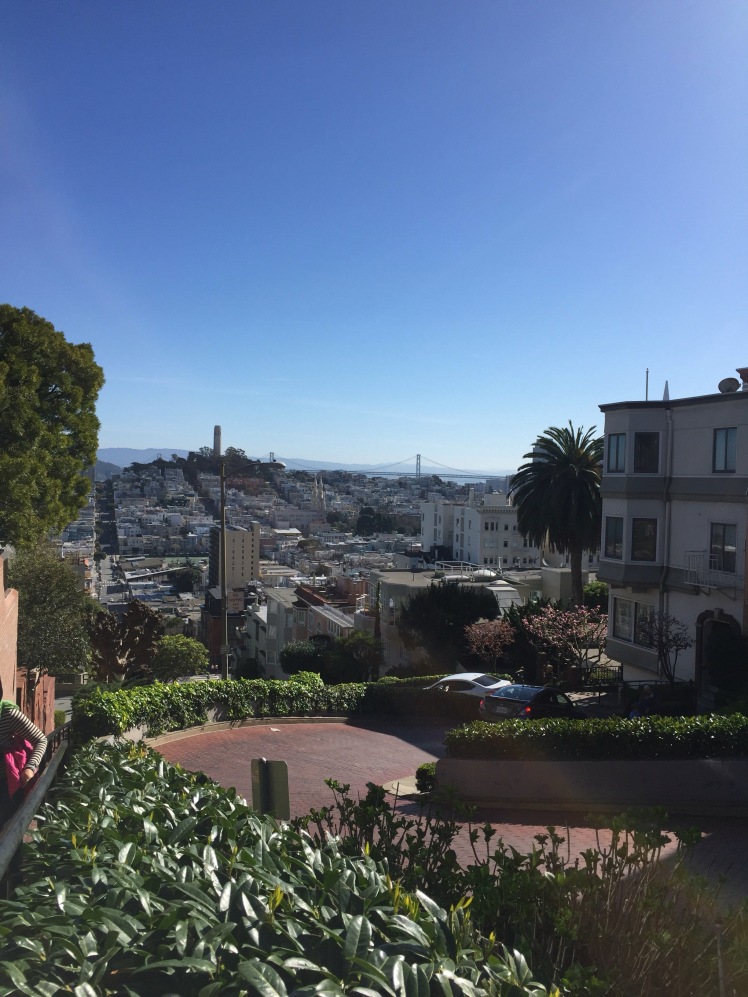 We wandered upto pier 39 again to see the Sea Lions during the day, they were all still piled on top of each other barking away and entertaining the hoards of tourists.

We then went in search of the go cars which John had previously used in Barcelona. They are a GPS talking car which narrates you around the city and takes you to some of the city’s key destinations. We stumbled across an independent rental shop who offered us 3 hours for the price of 2. We took him up on his offer and went to the shop to pick up our go car. You watch a safety video before you can drive, and each person is given a helmet to wear. You need to take out insurance which is done in the shop, it’s inexpensive and we opted for the premium version costing around $24. Once we were in our car a team member gave us another briefing before guiding us into the road and then we were off! 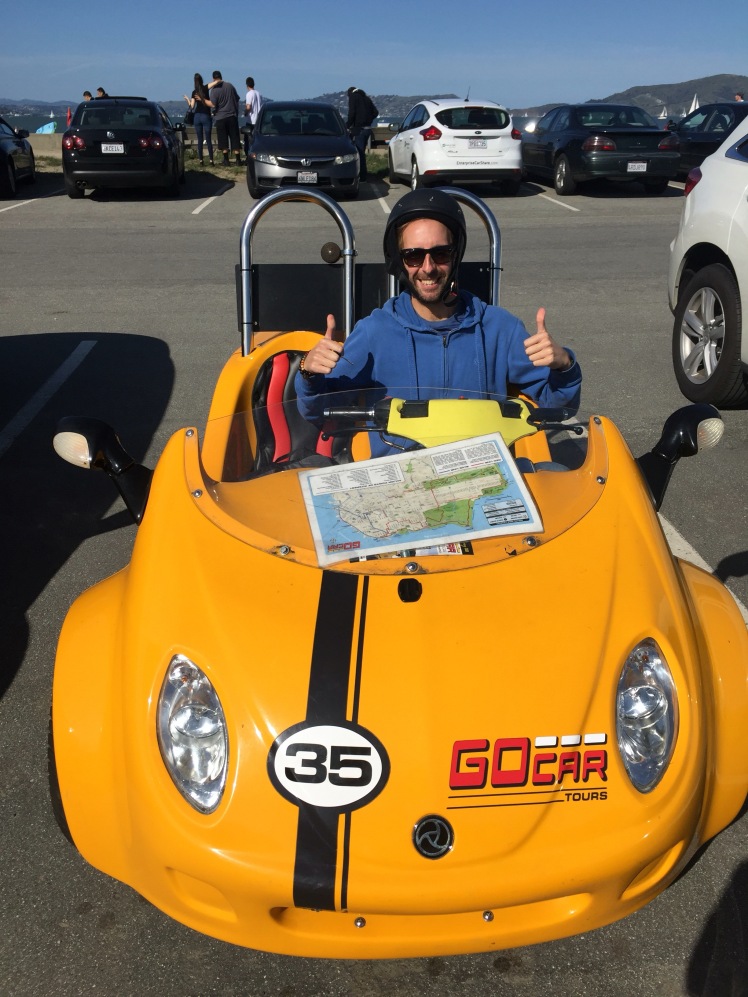 We took the red route, which takes in all the main sites and some of San Francisco’s beaches. At first it felt like a white knuckle ride, I could feel myself clinging onto the edge of the car as we drove around, lots of people were staring and taking pictures of us, but as time when on we both got used to it and it was a really fun way to explore the city.

The car took us to East Beach, The Golden Gate Bridge various view points, Sea Cliff and golden gate park to name a few. We did end up off route, the GPS told us to take a right on Paige which we did, and it then stopped talking… Sensing something wasn’t right we pulled over to check the map and try to guide ourselves back on route. We were driving up a pretty steep hill when the go car suddenly lost power and we quickly had to make our way to the side of the road. We tried all of the troubleshooting suggestions and then phoned the office who sent someone to us. It turned out we had run out of petrol, which was NOT our fault as we were told to ignore the petrol gauge as it did not work, and we have enough petrol to last 3 hours. Nevertheless we were soon on our way and headed back to where we picked the car up from. They were very apologetic and as a gesture of goodwill only charged us for one hour of hire.

We ended our day of great fun on the Go Car by heading to Applebee’s for some buffalo bonesless chicken and some ribs. Then wandered around pier 39 at night and buying a hot chocolate to keep us warm on the cold San Francisco evening. 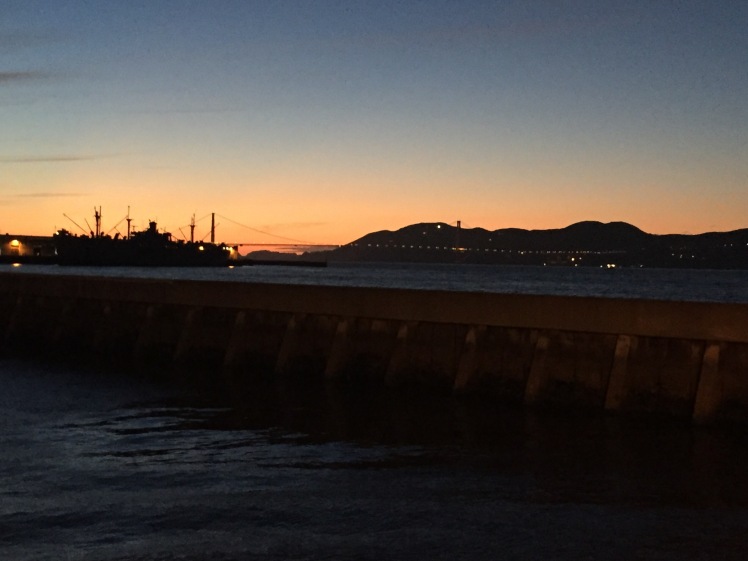