After our fun filled day at the zoo, it was time to pack up our bags and head to our final destination, Toronto.

We decided to save money and get the coach instead of flying as it was cheaper, and an overnight coach meant we saved on accommodation and didn’t loose a day sat in an airport. I used the company wanderu again, I had previously used these to book a ticket to vegas and had a good experience, so decided to use them again as they were offering reasonable prices and I knew the ordering process was simple.

We caught the bus to the terminal, which cost $1.75 each and took a packed lunch for the evening. Our coach left at 6:20pm and was scheduled to arrive at 9:20am. The journey was pleasant and we stopped in several cities along the way (Philadelphia, buffalo and a few others). As we grew closer to Canada you could feel the temperature on the bus dropping, and see snow starting to fall. At around 5am we had reached the border between America and Canada. We were all asked to leave the bus, take our belonging and head into the passport control and immigration area. You then follow the usual immigration procedures before putting your belongings back on the bus and returning to your seats. The whole process was pretty painless, and we were back on our way within an hour (although I’m sure if you were to go at a busier time of the day this would be longer)

From the border to Toronto City Centre was around 90 minutes, snow was piled up at the side of the road and it was significantly colder than the already cold Washington! We decided the walk to our hostel would be too long, and made a rash decision to hail a taxi. The journey cost around $10, and we were so glad we decided not to walk it, as it was quite far. Our hostel was situated on the edge of a small park, when we arrived it was covered in snow and looked so beautiful. It was too early to check into our room, so we dumped our bags and went straight out exploring.
By this time we were ravenous, and stumbled upon an Irish bar where we got some food and John watched his first full game of football since we were in Thailand! We both opted for a pie, John having Chicken and Mushroom, myself having Steak and Guinness. After devouring our feast within minutes we walked it off along the river, taking in the sites of the CN Tower, an ice skating rink and the Air Canada Centre. We ventured inside of the Air Canada Centre to see what the ticket situation was like for the Toronto Maple Leafs, as we both fancied witnessing an ice hockey game. Being unsure whether or not we would be back in time from our trip to Niagara Falls the next day, we decided to hang fire on the tickets and buy them on the night. 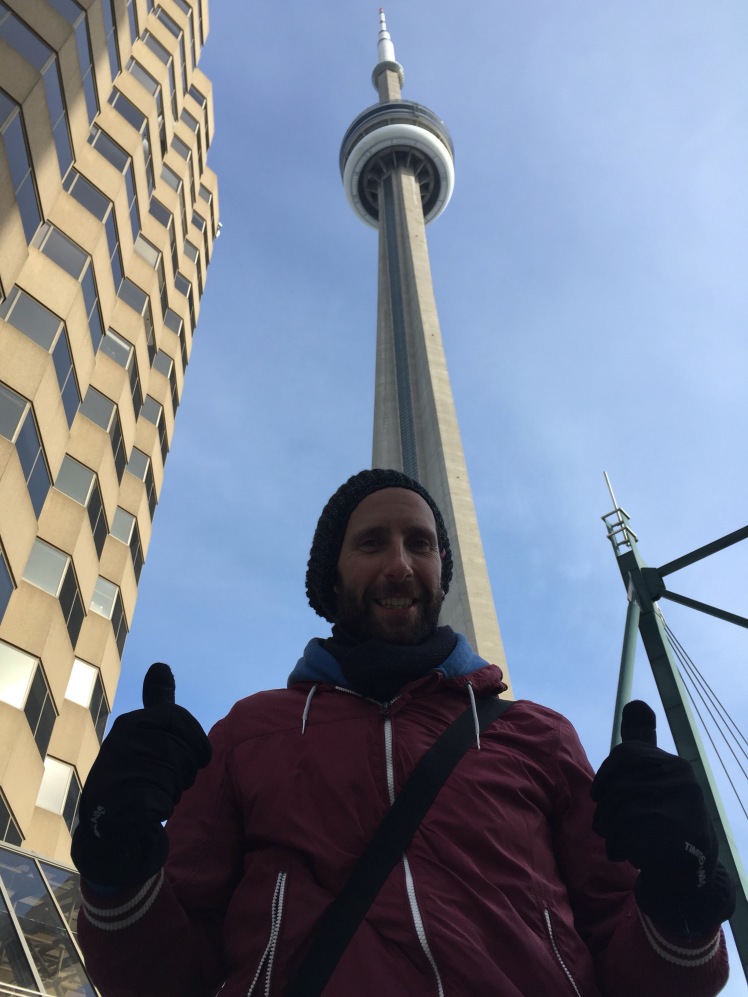 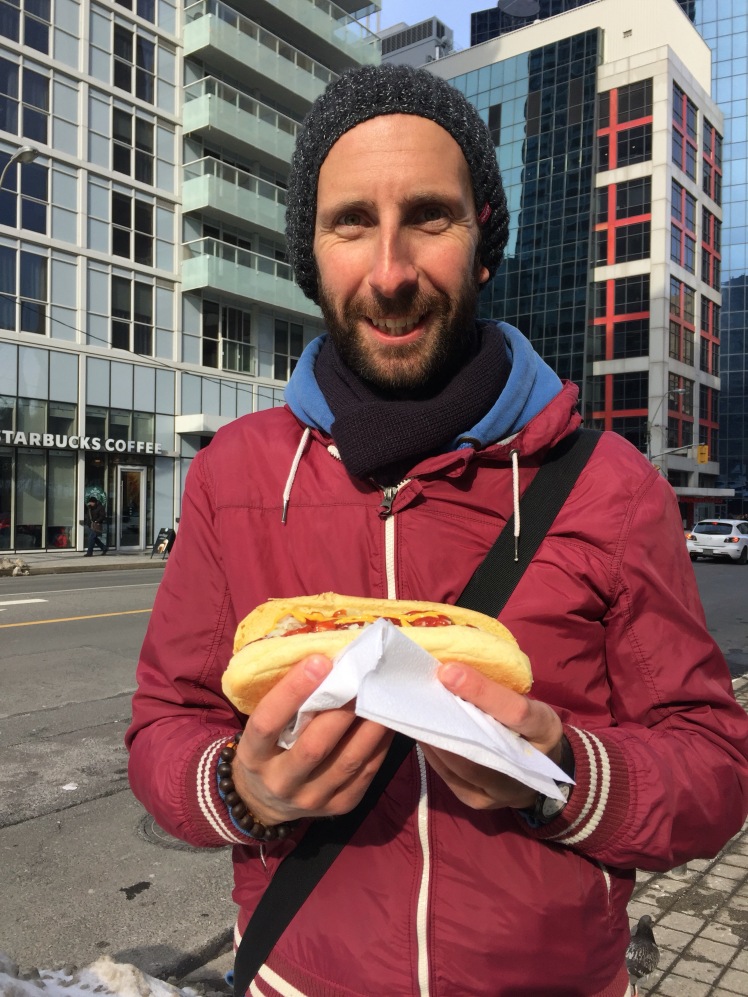 We stumbled across another ice skating rink, and we were both mesmerised by the terrific skaters making the sport look far more graceful than we ever could. We walked past a $1 hotdog stall and John decided he wanted one, it was quite tasty and filling and was so cheap! It was then time to head back to our hostel and have an afternoon power nap, before we explored the streets of Chinatown which was a 5 minute walk from where we were staying.

That evening we shared a plate of chow mein style noodles and walked along the streets looking in a funky record shop before deciding to call it a night, it was freezing cold, snowy and we had an early start planned for our trip to Niagara falls.