I named this blog 124 days around the world because our initial itinerary meant we were away on our adventure for 124 days. Little did we know that some careful budgeting and not overindulging would lead to us extending our journey for a little bit longer.

They day we set out we also didn’t know where the last part of our journey would be. We knew it would be somewhere in North America but had no idea it would be Toronto, or that after we landed in LA we would also make a trip to the Caribbean to enjoy the Mexican sun.

The evening before we left we splurged on some tickets to watch the Toronto Maple Leafs at the air Canada centre. We could have opted for the cheap standing seats, but decided we would get some slightly more expensive ones as it was our last evening away. At $70 each they were quite expensive, as was the beer and popcorn we shared. But we decided as it was our last night we should enjoy it. The match was exciting, there were fights, extra time and penalties so we felt we got our monies worth. 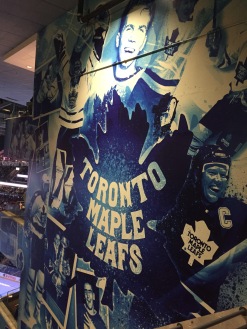 We woke up the next morning feeling pretty strange, we talked about all the different beds we had slept in over the last few months and that the next time we sleep in a proper bed it will be our own.

We decided to take another walk to the ice skating rink and watch the skaters again, before getting out of the cold weather by heading to the shops. After 2 different long haul stints in Abercrombie and Fitch (with a pit stop at KFC in the middle) we decided we should call it a day and head back to try and pack our backpacks. 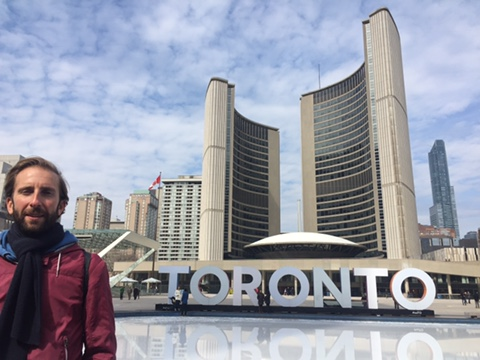 I have no idea how we managed to fit everything in that day, we had purchased several bulky items including a coat and hoody, which needed to make its way into our already bulging backpack of souvenirs. But somehow we managed it.

Our final trip to the airport wasn’t going to be in style, we went for public transport consisting of a tram, a train and a bus. This option cost us a few dollars rather than the extortionate price of a taxi.

Checking in for our final flight was strange, we had been on over 20 flights, to all sorts of destinations and it felt strange that this was our last one to take us home. In true traveller style we shared a portion of chips at the airport instead of having an extortionately priced meal, plus we knew we were getting fed on the plane.

We landed in England to drizzle and grey skies, which is pretty similar to the weather when we left, our taxi was waiting to pick us up and our driver said how impressed he was that we were still talking after all that time spent together!

So that what the end of our adventure, 4.5 months of exploring the world, seeing some incredible places and making amazing memories…..